Here comes the flop. It’s all diamonds… and the player instinctively examines his hand.

As we’ve discussed before in other contexts, you should always look for instances when an opponent peeks back at his cards. This can mean different things depending on the situation.

Usually, this act of double-checking is unconscious. The opponent is not putting on an act, but simply is trying to secure information. In fact, you’ll usually see this done quickly, almost clandestinely. The looking back will occur fast, and then it will be over. If you miss it, you miss it. This is from Mike Caro’s Book of Tells – The Body Language of Poker

Okay, so here are two very-low-resolution photos from years past, but hopefully they’ll help convey my message… 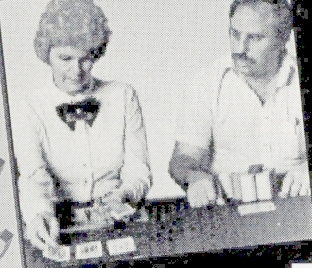 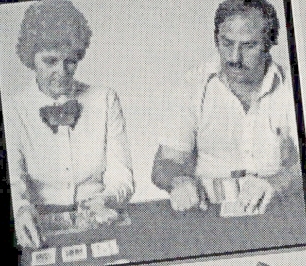 Description: In the first photo, the player watches the flop. In the next photo, he realizes that all three flop cards are diamonds, and he begins to double-check his hold ’em hand.

Motivation: He wants to find out if he has a diamond.

Discussion: Players remember denominations (such as king, seven, deuce) more readily than they do suits. Only if both hole cards are suited are unsophisticated hold ’em players apt to be certain of their exact cards before the flop. For this reason, if the flop is suited, players must look back to see if they have a card of that suit. When you see a player peek again at his hand, it should tell you that he does not already have a complete flush. However, he may have one card of the suit flopped. His double check should also let you know that he doesn’t have two pair or trips, because then he’d know it and he wouldn’t need to look. This latter conclusion is a bit dangerous with some players, since they may hold hands like K♣ 7♣, see the flop come K♦ Q♦ 7♦, and need to check to see if the seven also paired them (they usually can remember that the king paired them). In any case, this tell lets us know almost for sure that our opponent doesn’t have a flush. This is one reason why you should be watching your opponents when the flop is spread. You can always look at the board later; it won’t change.

Best Strategy: If you hold K-J (top pair with second best possible kicker) and you would bet if the flop weren’t suited, you should consider betting anyway against this opponent. If you hold K-Q (two big pair) in no-limit and this opponent subsequently moves all in against you, you should be more willing to call than you usually would. That’s because there’s a good chance that he holds something other than a flush.

Perhaps his hand is A♦ with Q♣, giving him a draw to the best possible flush and a quality pair. Your exact decision in a no-limit game would be based on many other factors. Remember, any weak–to-average player who double-checks after the flop is giving you important information to weigh while making your decision. — MC