Up to three-month contract offered at these rates

We’re not sure how much traffic will increase after Poker1 officially opens.

During testing, with most main sections not functioning, we averaged over 2,000 visits and 8,000 entries read per day, based on actual server statistics. (Screenshots of stats available on request.)

“Just get it started”

The audience is highly focused on poker, life strategy, and Mike Caro.

Six-month and annual rates will be quoted once we evaluate increased traffic after our planned December 20, 2013 opening.

Until then, Mike says, “Just get it started at token prices.” He greatly values his close relationships with the industry and appreciates early sponsor support.

So, these introductory rates are being offered: 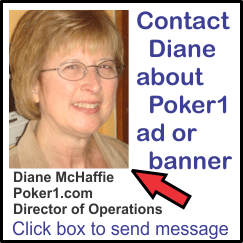 Notes: · Header and sidebar ads appear on all Poker1 pages, except the credit-card processing page for the store, which is off-site. · Positions in the header begin to the right of the Poker1.com logo and Mike Caro image at far left. · Banner ads will appear normally in any full modern browser. · Because of the specialized nature of the display of tables and data at Poker1, the site isn’t optimized for screen widths less than 1,024 pixels. Sidebars and headers containing these ads generally won’t appear on specialty, reduced-functionality browsers and cell phones. Poker1 ads are targeted for laptops, tablets, and home computers with traditional web browsers. Very little Poker1 traffic comes from cell phones or limited-feature mobile browsers. · Poker1 offers a free optional on-site landing page that advertisers can design, if they don’t have another link preference. Pages must be approved by Mike Caro. · Ads must be approved by Mike Caro or by Diane McHaffie, Poker1’s director of operations.