Note: Not at the old Poker1 site. A version of this entry was first published (2009) in Poker Player newspaper.

Previously, I discussed how lots of players overestimate the importance of using statistics during a poker game. I acknowledged that I’m personally obsessed with calculating poker odds, but they are mainly used to research strategy.

Once that strategy is validated and I publish the results, all you need to do is follow the guidelines. The mathematics used during analysis isn’t particularly important for purposes of profit — although memorizing a few key odds and being able to calculate the relationship between pot sizes and wagers is useful.

Despite my assurance that you don’t need to know much math to win at poker, today we’ll be including statistics when discussing hold ’em pairs. Go figure.

Anyway, here’s your standard reminder: This is another in a series of self-interviews in which I ask myself questions and then answer them. Although the question numbering picks up where we left off last time, this interview is completely independent of all others.

Question 145: How often do you start with a pair in hold ’em?

Not often enough to make most players happy. The odds against are easy to conceptualize.

Think about it this way: You start with a 52-card deck and after you receive your first card, no matter what rank it is, there are 51 cards remaining and three of them will provide you with a pair. So, you’ll end up starting with a pair three times out of 51, which is once in 17 deals, on average.

It’s interesting to note that if you’re in a typical nine-handed hold ’em game and open in first position with a pair of deuces, most of the time nobody else will have a pair. In fact, you’ll be facing an opposing pair only about two-fifths of the time.

Keep in mind that this stat doesn’t justify playing that pair of deuces. It’s just a fascinating fact, at least to me.

Question 146: What are the differences in expectation and tactics between large and small pocket pairs?

With multiple players competing for the pot, small pairs almost always need help and large pairs can often win without it. That’s the reason why, in most cases, two high-ranking, unpaired starting cards are superior to a small pair.

Question 147: You sometimes talk about how often the flop will disappoint you when you hold a pair. What do you mean by “disappoint”?

Suppose you hold a pair of deuces.

If six opponents call the flop, none with a pair and all holding different ranks, it would be impossible to survive the flop and still be holding just that pair. You’re temporarily holding the highest hand, but you can’t maintain that status unless you catch another deuce. Someone else is guaranteed to have made a bigger pair — or something stronger.

To make it really simple, I often describe disappointment in the flop to mean that you fail to catch another card of your rank and, at the same time, at least one card higher than your pair appears. Under that definition, holding Q-Q with a flop of 10-7-2 is okay and not disappointing, but holding Q-Q with a flop of A-4-3 is disappointing, because you’re threatened by anyone holding an ace.

As I’ve said, that’s a very simplistic definition, but it provides insight when comparing starting pairs. Being disappointed in the flop doesn’t always mean you must abandon your hand, especially with higher-ranking pairs.

Question 148: I see that you brought a chart. Could you show it to us?

This chart shows how often you’ll be disappointed by the flop when you begin with a pair in hold ’em. We’re using the definition of “disappointed” described in the previous question.

I’ll hold up the chart now…

This table was corrected for this and one other P1 entry on 2013-11-05, prior to the Poker1.com official opening.

Bill Handy, my colleague in creating Caro Online Poker Solutions (COPS) to prevent online poker cheating, pointed out the mistakes. Strangely, I cited my own Professional Hold ’em Report as the source — and it was correct!

Somehow I or an associate jumbled the numbers, I badly recalculated the table (extremely unlikely), or something else weird happened. Mystery unsolved.

As proof that I was quoting the right source (my own), here is a photo of my table, as published in 1988. Go figure! 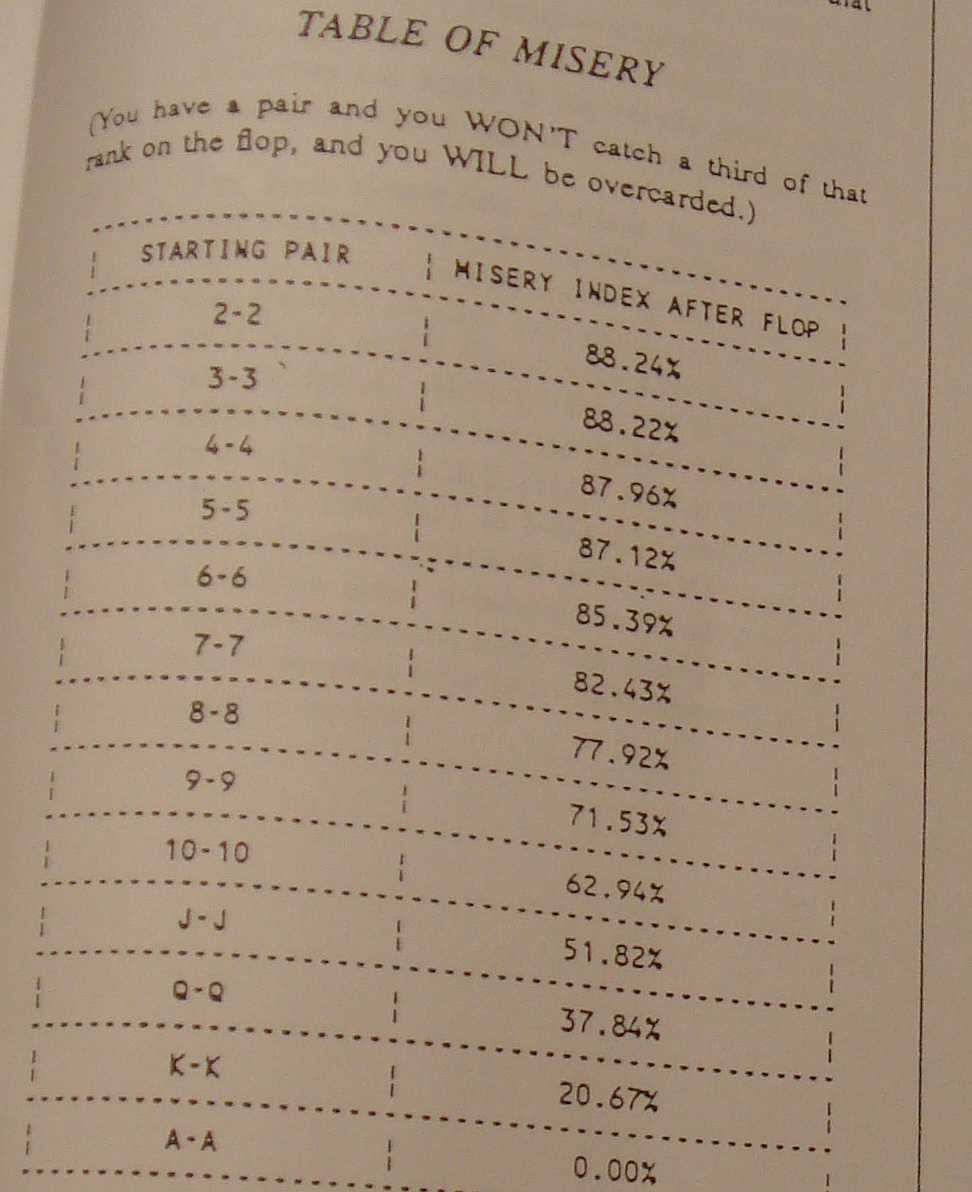 This serves of an example of why we ask visitors to point out glitches in the thousands of entries at Poker1. Some have been hastily reformatted and uploaded.

If you see any inaccuracies, typos, misspellings, grammatical errors, or other glitches, please report them using the contact link at the bottom of all P1 pages. — MC

Question 149: In a few sentences, could you summarize the keys to playing hold ’em starting pairs successfully?

The topic would take a few books to examine, not a few sentences.

Small pairs — especially deuces, threes, and fours — are unprofitable when played from early positions. The only borderline exception is when most remaining players are weak and unaggressive.

Small pairs can often be played profitably from late positions and against a single opponent.

It’s okay to just call with aces, despite much advice to the contrary. You should often raise, of course, but not always. In fact, there’s more reason to raise aggressively, attempting to drive players out of the pot, with jacks, queens, or even kings, than with aces.

With a medium pair, such as 9-9, when you see a flop of all lower cards, often you should bet to charge players an appropriate price, and not offer them a free chance to pair bigger than you on the turn or river.

No. But we’ll share even-more advanced concepts relating to hold ’em pairs in the future. See you then.