This is one of my favorite tells, and it doesn’t apply only to draw poker, which was the vehicle used in the following excerpt from Mike Caro’s Book of Tells – The Body Language of Poker: 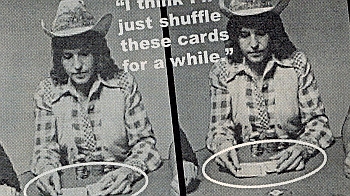 Description: What you see here happens frequently in five-card-draw poker. Imagine that the woman has drawn one card to a flush. She will continue to take the top card from her hand and place it on the bottom. She’ll do this over and over until the action reaches her and it’s time to look.

Motivation: She needs to improve her hand to win and doesn’t want to see how it comes out just yet. Building suspense is a common habit with some players; it usually happens when they figure that they don’t have the best hand and must, therefore, get lucky on the draw.

Discussion: When you see a player shuffling through his or her cards, you should figure that the hand requires help. Also, it turns out that there’s a much better than average chance that the player is drawing to an especially powerful hand. In draw lowball, many players shuffle only if they’re drawing to a bicycle (5-4-3-2-A, the best possible hand) or a six. Players seldom shuffle on less suspenseful lowball draws, such as one card to a nine. In high-hand-wins draw poker, there’s a very great chance that any player prolonging the suspense by shuffling his cards is drawing to a straight or a flush.

Sometimes, you’ll find seven-stud players shuffling their three holecards before looking at their seventh (final) card. As you’d expect, among weak players, this generally means they must improve their hand to win.

Best Strategy: Use logic. Suppose that you’re playing jacks-or-better-to-open draw poker. You open with a pair of aces. An opponent calls. You draw three; he draws one. You look at your hand and see three aces. Normally, you’d be tempted to bet in this situation, because if your opponent was drawing to two pair and he didn’t help (which is likely to happen 11 out of 12 times), he’d probably call you anyway. However, when that opponent is shuffling, you should figure that there’s a very good chance he’s drawing to a straight or a flush, and you should, therefore, check rather than bet. If the game is lowball and an opponent draws one, shuffles, then bets, you should not raise with a smooth seven (such as 7-4-3-2-A), even though you might have raised had he not shuffled.  — MC