Well, it takes time to stack chips and put cash into a neat bundle. Having to play another poker hand at this moment would be distracting, so you’d probably be less likely than usual to enter a pot with a weak hand or to run a bluff from scratch. 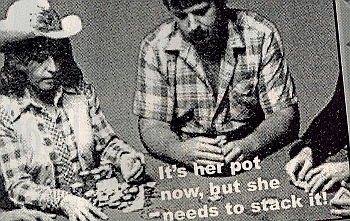 In today’s picture, we’ll focus on the woman wearing the hat From Mike Caro’s Book of Tells -The Body Language of Poker:

Description: There is a great deal of chips scattered in front of the woman. That’s not because she isn’t organized. It’s because she just won a giant pot and hasn’t had time to stack it.

Discussion: Most players like to stack their chips before they get involved in another pot. This doesn’t mean they won’t play strong hands. A player even may toss in a few chips on medium-strength hands as a courtesy while sorting through the last pot. However, there’s one thing players will almost never do in this situation, and that’s run a bluff from scratch. True, they may end up bluffing, but when they enter pots, it’s almost always because their hands merit it.

Best Strategy: If this woman plays a hand while she’s still stacking a giant pot, give her credit for having at least medium power. Don’t invest money on the hope that she entered the pot bluffing.  — MC