When I was about 10 years old, friends of mine would gather around and see who could hold his breath longest. I’ll bet you did this too. One of the better examples of this type of behavior carried over into adulthood comes in poker. It’s when you see an opponent lean back in his seat between hands, making only a minimum effort to reach forward, when necessary, to see what cards he’s been dealt next. 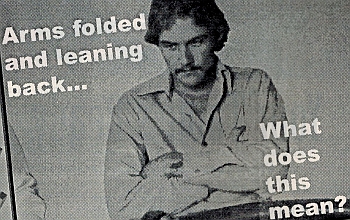 In the photo, the opponent is showing patience, trying to outlast his opponents by maintaining discipline the longest. It’s really just an adult breath-holding contest, without the actual breath holding.

By the way, this usually is not a tell from an actor. You’ll remember from our previous discussions that there are two major categories of tells: tells from actors and tells from players who are unaware.

Actors assertively try to trick you into thinking their hand is strong if it’s weak or weak if it’s strong. Unaware opponents, like the man pictured today, aren’t trying to trick you. This man’s mannerism gives you powerful information, but it isn’t conveyed deliberately. From Mike Caro’s Book of Tells – The Body Language of Poker:

Description: From the expression on this player’s face, his mind seems to be on something other than poker. He’s leaning back slumped with his arms folded.

Motivation: This player is not in a gambling mood and is simply relaxing while waiting patiently for a good poker hand.

Discussion: This sort of body language seems to convey patience and that’s exactly right. Here you see that this player has just received his fourth card in seven stud. He apparently has little interest in this pot. It’s possible he got the fourth card for free because nobody bet on third street. In any case, this pot isn’t very important to him. Players who are winning and wish to sit on their lead will often simply lean back and wait for the good opportunities. True, players often act uninterested when they have strong hands, but that isn’t the case here. If this man were trying to deceive you, he’d probably do more than just lean back and stare. He’d likely look away from the action or even start to throw his hand away prematurely. Those tells will be analyzed later. Take a good look at this man. When you see someone whose mannerisms are similar, you can be pretty sure he’ll play only quality hands.

Best Strategy: Seldom get involved in a pot with this man. — MC