There is danger all around us, my friends. Maniacs. Machinery. Weapons of war. Wild animals that eat us up. So what? Are we going to spend the rest of our lives hiding under the front porch? Are we going to tiptoe around every day, afraid of our shadows? Are we men, or are we sissies? 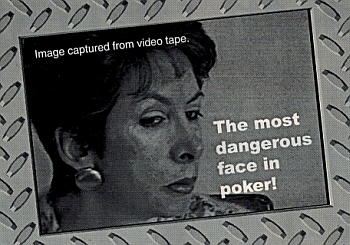 Wait! Don’t answer yet. Life doesn’t need to be terrifying. Life can be pretty comfortable, once you learn the danger signs. Green means go; red means stop. The skinny dude with the slingshot ain’t gonna scare off the babe holding the bazooka. Stuff like that. Once you learn these basic keys to success, you’ll do fine. Oh, yeah, there’s one more: The woman’s expression in today’s tell ought to scare the hell out of you!

First, let’s set the record straight. That’s my former-wife Phyllis, and when I first published this, I had no idea how she was going to feel about being called “the most dangerous face in poker.” (Fortunately, she liked it.) Maybe I should explain why she’s so dangerous in this carefully posed scene from a video. She’s not on the FBI’s “10 Most Wanted” list, and she doesn’t deal from the bottom of the deck, so what could it be?

Look at her eyes! Even though her head is turned away from you, her eyes are straining to see what you’re going to do. She’s following the action, but she’s trying not to make it obvious. This is a classic case of a player trying to act uninterested when keenly interested.

What happens if you bet into this woman. Should you expect to get called? Absolutely not! You should expect to get raised! Memorize that face. You’ll see this tell several times every poker session. Their heads will be turned slightly away from the action, but they’ll be watching the action out of the corners of their eyes.

What does it mean?

Whenever you see a player acting similarly to today’s illustration, don’t bet. Unless you have a super-strong hand, check and pass. Save your money. I repeat : You’re looking at the most dangerous face in poker. — MC

One thought on “Poker tell: The most dangerous face in poker!”