I like to clear my mind now and then my playing Scrabble against a computer opponent.

In fact, I woke up my brain this morning by doing exactly that. Some background… My choice is to play against an “intermediate” level computer opponent. I always choose 25 minute games, meaning each player must play all remaining tiles before the individually timed minutes expires or there’s a 10-point penalty (and another one for each additional minute). The computer usually makes all its choices in less than a minute total. So, it wins there.

However, I win games at a ration of over 30 to 1. My spreadsheet (yes, I keep records!) shows me with 807 wins over the years against 25 losses. (There has been one tie.) My longest streak has been 94 games. I know that’s too much information (TMI), but I’ll be getting to the point. Sometime soon.

About mid-game, I’m slightly ahead, but Mr. Intermediate still has hopes of beating me. Then I crush his little computer heart. He has placed the semi-obscure word PROW on the board, so that the P is one down from the top left corner. The tiles I’m holding are: ETOQASU.

I see that I can play OPAQUE vertically, using my opponent’s P. But wait! I can try OPAQUEST, using all my tiles for a 50-point bonus, doubling my Q’s 10 points to 20, because it falls on a double-letter score, for a total of 29, tripling that, because I’m using a triple-word space, and tripling it again (nine times the word count), because I’m using a second triple-word space in the middle of the left column. Add it up and it’s 311 points.

I know some will argue that it should be 711 points, but you don’t add the 50-point bonus until after everything else is counted. Maybe if you argue loud enough… I also know that serious Scrabble players have probably experienced this before, although I’m guessing it’s not that common.

I’m not a Scrabble master or anything close to it. I don’t know a lot of the key Scrabble words. I compensate for that somewhat through strategy, having a good grasp of when to exchange tiles, when to pass (very rarely), when to accept smaller word scores in order to hang onto key tiles, and more. And, as becomes obvious, I know how to gamble.

Now I have to decide. Should I settle for the safe 81 points that OPAQUE provides, or should I gamble? You know what business I’m in, right? I gamble.

And, OPAQUEST turns out to be a legal Scrabble word! Before I played it, I was thinking it’s probably not a word. I mean, if something is opaque, it means that you can’t see through it. So, how can it be more opaque (opaquer) or most opaque (opaquest)? But then I’m thinking, well, maybe… And what if… yeah, what if it’s an art movement I haven’t heard about, like cubist. Opaquest, cubist — makes sense. If it were “uniquest” I would know it’s not a word, because — if something is unique, it’s one of a kind. It can’t be uniquest; it’s not going to be an art movement. So, no to uniquest, yes to opaquest, right? Wrong! Both words are in the Official Scrabble Dictionary! Go figure.

And then it’s done and I’m credited for 311 points, and I’m feeling sorry for Mr. Intermediate, knowing I’ve done him unnecessary psychological damage.

Below is a screenshot of the Scrabble board, with the dictionary (only available after the game) showing the existence of “opaquest.”

So, that’s my day so far. Thanks for letting me share it. — MC 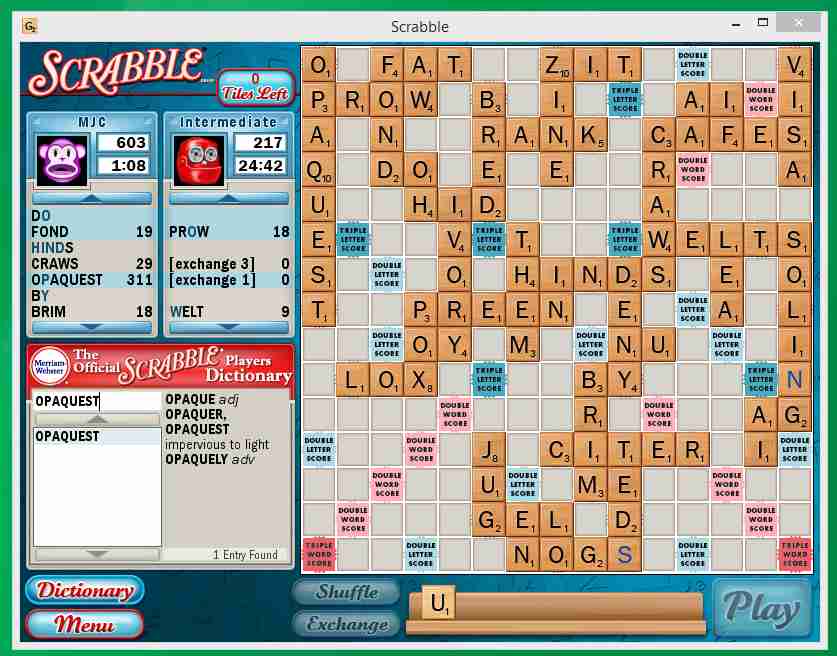